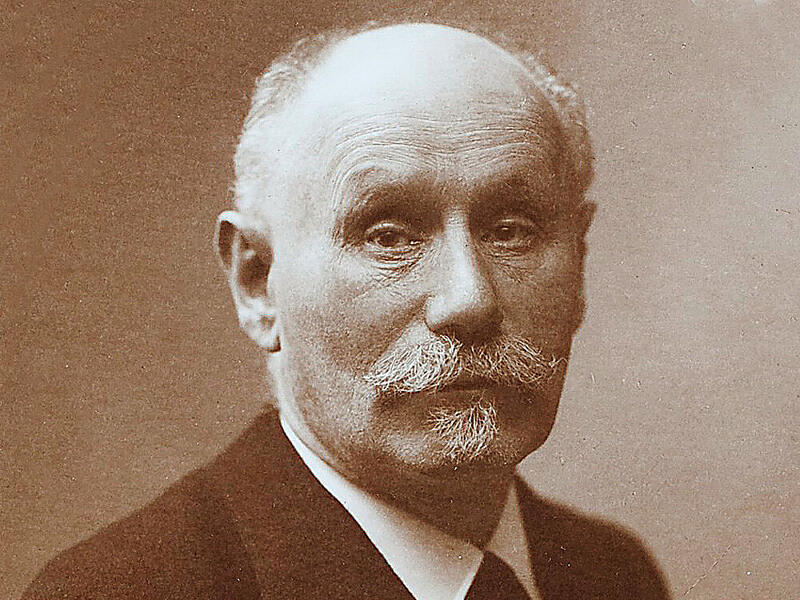 Abraham Gumbel was a co-founder of the social democratic local association and the Volksbank. He also led the Heilbronn peace movement. The man who left deep marks was long forgotten.

Article from the Heilbronn voice of August 17, 2019 by Christian Gleichauf

If the son of a well-known banker is on the road as a left-wing activist, one might dismiss that as youthful idealism. If this son later also campaigns for a stock exchange tax as a banker, opens the bank he runs to ordinary people as a bank manager, continues to take a political stance and publicly attacks the incumbent head of state in a turbulent time, then that is extremely unconventional. The revolutionary banker was called Abraham Gumbel and enjoyed the highest reputation in the entire Unterland at the beginning of the 20th century. Co-founder of the SPD in the city, financier of a new newspaper, founder of the Volksbank, leader of the peace movement. The question is: why has it been forgotten for so many decades?

Ulrich Maier wrote an article about Abraham Gumbel for the series “Heilbronner Köpfe” six years ago. The former German and history teacher at the Justinus-Kerner-Gymnasium in Weinsberg, who now lives in Sipplingen, has only a rudimentary explanation for the long-lasting disinterest: “He was uncomfortable.” What Maier brought to light from the archives made him sit up and take notice .

Gumbel came from a Jewish family. His grandfather, who was also called Abraham, was the host of the "Black Eagle" in Stein am Kocher. His son Isaak made his first money in banking and moved with his family to Heilbronn in 1860, where he received civil rights and bought the former hostel for the crown right on the market square next to Kilian's Church. Isaak Gumbel founded a bank together with his brother Moses, who called himself Max, in the place where Götz von Berlichingen is said to have lived.

From the 15th century onwards, Jews no longer had a chance to gain a foothold in Heilbronn. That only changed with the so-called emancipation laws and the legal equality of Jews in Württemberg in 1828. Gumbel knew how to use the new rights confidently, but also wanted to integrate himself into society - “like many Jews at that time,” emphasizes Ulrich Maier. Much, however, went far beyond the usual attempt at "assimilation".

After attending the Karlsgymnasium, Abraham worked in his father's bank. In addition, he founded a social democratic local association together with a certain master carpenter Gustav Kittler in 1877 and was thus a co-founder of the SPD in the region. A year later he wrote a leaflet for which Kittler even went to prison for several weeks.

After a few years in Reutlingen and probably also in Paris, Gumbel returned to Heilbronn in 1887, where he first left the SPD. “A Jew and a socialist, in his father's opinion that would have been a bit too much at the time,” supposes Ulrich Maier. Nevertheless, Gumbel remained connected to the comrades in the background.

Even as a banker, Abraham Gumbel did not adhere to conventions and expectations. Even before his return to Heilbronn, he had spoken out in an article in favor of the stock exchange tax introduced in 1885 - and thus triggered a debate in the SPD that rejected this tax because Chancellor Bismarck had introduced it. Such an ideology seemed alien to Gumbel, even if it indirectly affected his own family's business.

Despite or because of these beliefs, Isaac Gumbel considered Abraham to be the suitable successor as bank manager. And after taking over the business in 1889, Abraham immediately made his newlywed wife Elise an authorized signatory.

He continued his father's line by rejecting speculative transactions. This became a plus when the Heilbronner Gewerbebank collapsed in 1901 as a result of speculative losses. The bank “Gumbel am Markt” expressly ruled out such speculative transactions - and it was not to its disadvantage. Business was good. In 1906 Abraham Gumbel had the old office building next to Kilian's Church demolished and replaced with an imposing new building.

After a short liaison with a Stuttgart bank and the conversion into a stock corporation, Gumbel decided on a different path: He separated from his partner and renamed his private bank to the "Heilbronner Bankverein": From now on, private individuals can participate in a Heilbronner bank for the first time . Around 100 investors raised the share capital of 600.000 marks.

The First World War began for the family - Abraham and Elise Gumbel had two sons and a daughter - with the death of their eldest son Max in the first few weeks of the war. A stroke of fate that strengthened Gumbel's pacifist attitude. Within a few years he became the "leading theoretical head" of the German Peace Society in Heilbronn.

Abraham Gumbel also remained active as a journalist. With his financial support, the SPD founded the "Neckar-Echo" in 1908 - by the way, the financing of the printing company was organized on a cooperative basis. He had a close relationship with the editor-in-chief of the left-wing “Sunday newspaper” Erich Schairer (who became editor-in-chief of the “Stuttgarter Zeitung” after the war). In various newspapers and magazines he took a stand against the German war guilt, which was denied in the rest of the press. Gumbel didn't mince his words under the pseudonym Emel. When he wanted to speak to the national liberal German People's Party in 1924, he was shouted down and his statements insulted as “communist”.

Abraham Gumbel was not only concerned with the academic question of how World War I could break out. He feared a new war, the strengthening of the monarchist and nationalist forces. How right he should be. In 1930, however, he died at the age of 78 before the National Socialists came to power. He was buried in the main cemetery. The Volksbank had the rest period extended by another 1960 years in 15. But when it expired in 1975, it appeared that neither the SPD nor the peace movement had an interest in what would become of it. The Volksbank returned the grave in 1975. It should take more than 30 years for the name Abraham Gumbel to be remembered. The Abraham Gumbel Hall was inaugurated in 2013 with the new Volksbank building on Allee.

Source: Article in the Heilbronn voice of August 17, 2019 by Christian Gleichauf, https://www.stimme.de/heilbronn/nachrichten/region/Abraham-Gumbel-Revolutionaerer-Bankier-Sozialdemokrat-und-Pazifist;art140897,4236933