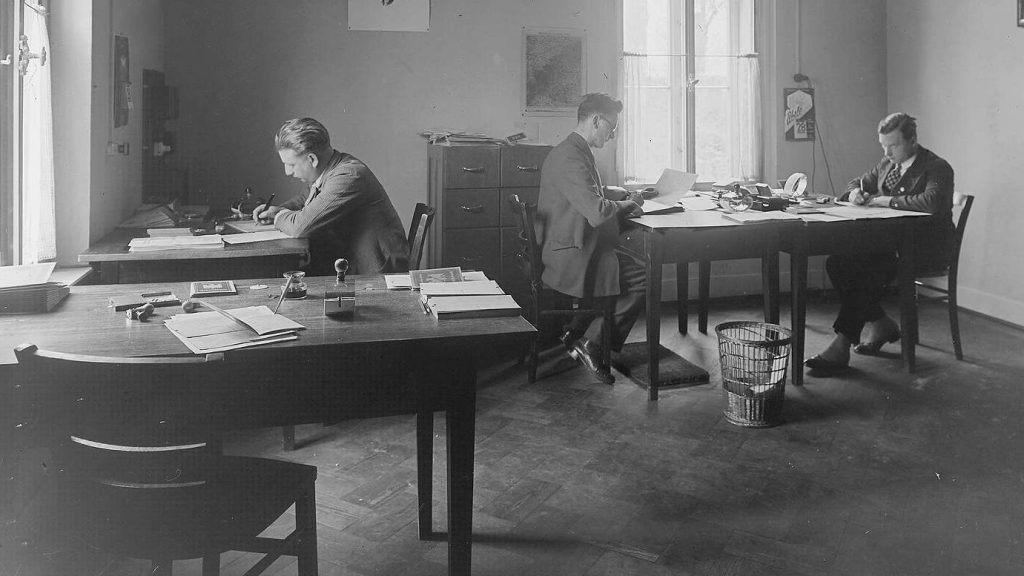 In Germany, the bureaucracy is scolded with inner satisfaction. And rightly so. Because there is nothing that can make the little trivialities so bilious and disgusting as the office room muff. The citizen - calm as he is - inserts all the rebukes and thoughtlessness, until he makes his heart breathe on occasion of a renkontres with a disturbed in the breakfast officials in "sent in" or cursing cannonade. As a result, he feels free - until the next time. Was he in? Wilhelmine rule Germany of a malevolent character, so he added and chose red. His subaltern attitude did not differ fundamentally from the file man. Since the daily trifles express and characterize the character, bureaucracy is not an incidental ridiculousness that could be overlooked, it is a cultural-political characteristic of German. In the public offices, this stuffy spirit is bred in pure culture, but on closer inspection, he spreads itself everywhere: in school, home and business, at the regulars' table as well as on the hike. He thrives best between inkwell and file stand on the floor of the pension entitlement, but all public life is infected. Only that one then no longer speaks of bureaucratism, but of banism, pettiness, narrow-mindedness. In this respect, the official is excused.

When the child, for the first time, writes a proper sentence in the traditionally prescribed booklet with approved pen, the cloudy spirit of narrowness flows in with it. The young man after passing doctorate or state work "on the ifs and buts of Heinrich von Veldecke" takes the thick muff out into life, which, elementary decomposed, composed of the following basic materials: better knowledge, prerogative, inferiority of the fellow man, ancienness as a principle , The school and the university certify in the diploma the composition of the muff hardened by exams. One donkey attests the qualification to the other. Whether you are a lawyer, a filmmaker or a military officer, the examinee has learned to categorize life, and to subsume all occurring cases conceptually under known magnitudes. "What you can not declinate, then you look at as a record remainder." In practice this means: work according to scheme "F". There is no profession that would be free from it.

For all ridiculousness, this musty ghost has its very, very serious meaning. Bismarck Complained with justification about the ambitions of the Privy Councils to make the people happy with a law whose substance they were allowed to consider as assessors. The modern kind of legislation is a legitimate child of this kind, as well as the arrogant administration. Legislative work is also schema F-work according to prescribed forms. The unusual, but eminently important, remains of the rest of the document: "We have not had that yet." That is very high up exactly the same as below. To reform at any point, as the clerks demand on the rotary press, has no purpose. What came out of the Foreign Office's reform, what about the simplification of administration, how much does the 100 000 mercenary cost? Even the triviality of the so-called revolution would have made sense to burn all the files and air 14 days all bureaus with their inmates. But the files remained, only the 14 days disappeared as it crashed, the scribe souls on the locus.

I know very well that this spirit can not be eradicated mechanically, either by force or with coaxing. He is the fruit of a totally false education and self-assessment of man. Of the human? Sorry, man with exam, title, degree, eligibility. And assessment of what one calls state, this institution in the range of the gods. Education in its communication of knowledge is entirely geared to the future profession, according to the humanistic schools (in Prussia) Humboldt's plan) prepare the officials; any character formation is detrimental to them. The self-assessment speaks to indispensability, dignity, which are not available. But the state affirms this high opinion through life and special protection (against insults, for example). But it is nonsensical to preserve such hammorhoidal bubbles at the expense of fellow human beings, who also have to indulge themselves.

It is therefore not enough to dispose of reasonable ministers. On the contrary, the supreme power would be uselessly wasted in the struggle against subaltern stupidity and passivity. Therefore, we want to regret the gentlemen who, out of idealism (rarely) or for the most personal reasons, try to cover the idle mechanism with their name, and have understanding for it Adolf Hoffmann lucid word: "Keener sees me here again."

Sometimes you crave for a man of violence, such as Friedrich II. it was who had the strength to eradicate where laziness, cliché, and arrogance spread. The case of Germany is apparently hopeless, because we specialists no longer have people who see the big picture.

God did not give his reason to every ministry; otherwise there would have to be fewer offices.