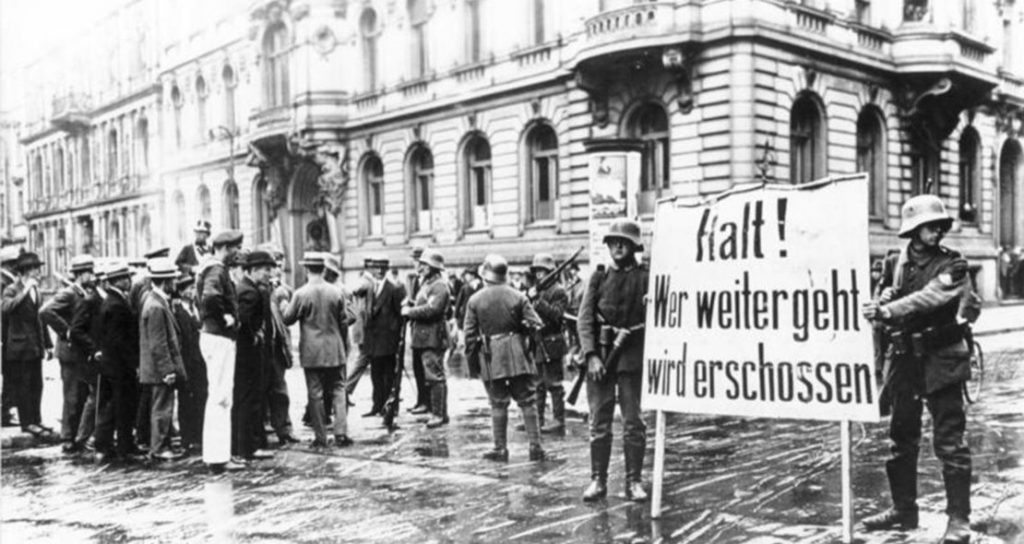 Text for the 90-minute documentary television play “The Counterrevolution”, part of the ten-part series "From Empire to Republic" of the Bavarian radio. Screenplay written by Klaus Gietinger and Bernd Fischerauer.

The Kapp-Lüttwitz Putsch of March 1920 is an almost forgotten chapter in German history. Wrongly. The attempt to stifle the first German democracy just one and a half years after its creation failed due to the democratic awareness of its citizens. The documentary follows on from the film "Violent Peace" and illuminates the circumstances that led to the first, initially successful coup d'état against Weimar. The republic created by the November Revolution in 1918 was initially threatened several times, most violently in March 1920. The Versailles Peace Treaty not only sealed Germany's defeat in the First World War, but also demanded ceded territories, reparations and a reduction in the size of the army. The old powers of the Empire particularly felt the so-called war guilt section of the treaty, which assigned Germany the sole guilt for the world war, as well as the demanded extradition of German war criminals - including Kaiser Wilhelm II. and Field Marshal Hindenburg - as a disgrace. The Allies' dissolution of the so-called free corps, paramilitary associations, which had been formed from the remains of the imperial army, was also not in the interests of the officers. In general, the parliamentary democracy of Weimar found no support in large circles of the military, high finance, industry, the nobility and the bourgeoisie. A fall in the system was in the interests of right-wing circles. Thus, at the end of 1919, high-ranking military officers and other men who wanted to put themselves together came together. This was organized by the former Free Corps leader Pabst, who had already ordered the murder of Liebknecht and Luxembourg. The putschists received financial support from parts of industry and banks. The figurehead was Wolfgang Kapp, an East Elbe junker and member of the supervisory board of Deutsche Bank. Also on board: General von Lüttwitz, the Freikorpsführer Ehrhardt, whose naval brigade was to carry out the coup, Canaris, the adjutant to Reichswehr Minister Noske and, as a covert member, the Prussian intelligence chief from Berger. The former World War II general Ludendorff worked in the background. Directed by Bernd Fischerauer, the film meticulously depicts the course of the coup, which only lasted five days: how the legitimate government was chased away under Reich Chancellor Bauer, as well as Reich President Ebert and the Reichswehr Minister Noske, who was unsuspecting the military, the forced minister Erzberger, the ambivalent attitude of the Reichswehr officers and the security police, who refused to provide the government with the necessary protection. The government's flight, the putschists' dispute, their unsuccessful attempts to use the appointed vice chancellor Schiffer and toss the tide towards the dictatorship, and finally the resistance of the workers, employees and officials who brought the putschists to their knees in the largest general strike in German history . Representative of this is the editor-in-chief and women's rights activist Marie Juchacz and Hannah Wölke. The art patron Harry Graf Kessler and his protégés: the actress Tilla Durieux, the painters and graphic artists George Grosz and John Heartfield accompany the event ingeniously. When the spook of the coup was over, there were riots in the Ruhr area. The government, returned to Berlin, was reshaped and Noske had to say goodbye, but the traitors were largely left unpunished, the uprisings, however, were brutally suppressed, sometimes even with the use and use of the military power of the former putschists. The people had shown themselves to be democratic and defensive, but most of the army and judiciary had not. In contrast, a group of early fascist opponents of the republic was able to gather in Bavaria.