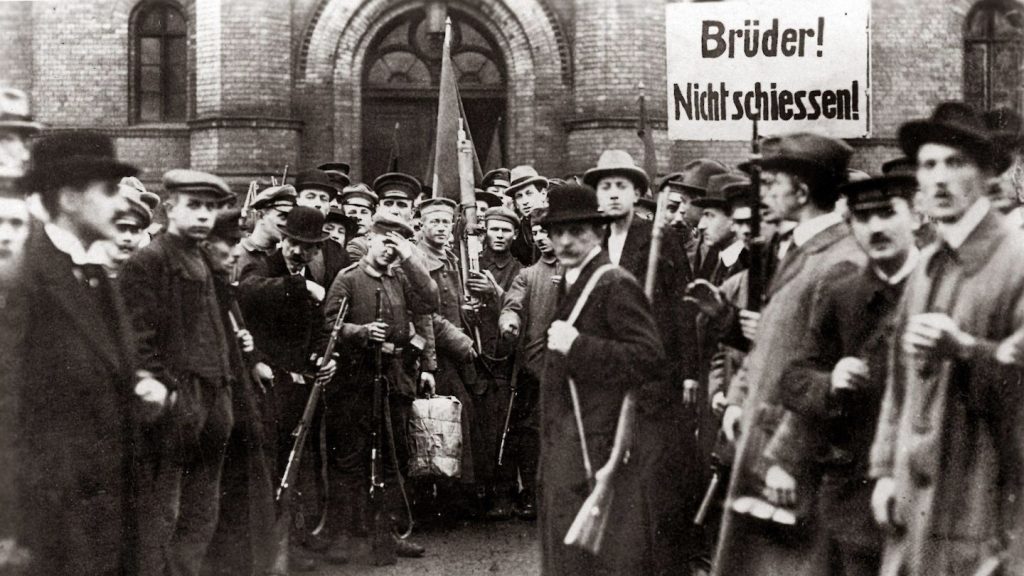 Representatives of the Workers' and Soldiers Council in front of the Guard-Ulanen-Kaserne in Berlin, which was left without a fight.

That's the wind of reaction
with mildew, frost and all that;
that's the bourgeoisie at the throne,
which is still standing, despite all this.

Do you know when the German constitution was adopted by 1871 in the Reichstag? Not me. No one ever came up with the idea of ​​celebrating this day as the birthday of the German Reich. This is known to be due to the 18. January, the day on which 1871 (after a long bargain between the princes) King Wilhelm of Prussia in the Hall of Mirrors of Versailles Castle has been proclaimed German Emperor.

Things are different with 1918. The 9. November, when the Republic was born, is an embarrassing memory for our officials and officials, something that smells of Bolshevism. So we prefer to celebrate the birthday of our German Republic 11. August, the day on which Friedrich Ebert signed the Weimar Constitution in the year 1919.

Strange with that. With its radical demands (or let us say quietly "formulations") such as democratization and socialization of enterprises, land reform, Reich Workers Council, unified school in the sense of breaking all educational privileges, etc., etc., they could have had a revolutionary effect and impact - in November 1918. In August 1919 that was completely excluded. Laws are, as Lassalle has correctly recognized, only effective as expressions of real power relations; but those in the fall had shifted 1919 so far to the right that on paper they could behave radically without fear because they knew that paper was patient, that they would not eat the soup half as hot as they cooked was. (In a nutshell, they did not "boil" at the time, they only "steamed".) As grotesque as it may sound: anyone who seriously wanted to carry out the Weimar constitution according to their letter and their spirit today could do so only with the means of the proletarian dictatorship, and vice versa, it would be quite a respectable achievement for a proletarian dictatorship, even the work of Weimar (read it carefully!) into reality.

What was before 11 years ago the 9. November? A day of jubilation and liberation, a jubilation that swept away even the wider bourgeoisie. What is the day of remembrance today? "A laugh and a painful shame." What should he be to us? A day of contemplation and self-reflection about what has been missed, reflection on what we can do today.

The bourgeois legend, the 9. November 1918 was not a day of revolution, but only a day of collapse, must be met sharply. It has a true core only insofar as in all revolutions (eg 1789, 1848, 1871 in France, 1917 in Russia) economic crises, famines, military collapses have given the last impetus to open turmoil. But the military collapse and the German truce offer fall already in the first days of October, and the proclamation of the Republic in Munich on 7. November would have happened even without the Kieler sailor uprising. It was as possible everywhere as the necessary response to four years of inhuman oppression, it was not the work of one party or group (there were few Spartacists at that time, SPD and even USP swayed), but only the work of the broad masses. When Philipp Scheidemann - anything less than a revolutionary - proclaimed the German Republic from the balcony of the Reichstag, was the whole thing merely a formality (or a means of preventing the proclamation of the Soviet Republic by Liebknecht?), For the workers' battalions had long ruled Party orders from their factories marched into the city center, the streets of Berlin.

Only a few weeks before, however, Vice-Chancellor Payer had expressed to Prince Max his abhorrence of the parliamentary system in the English pattern, his party (the Progressives, now Democrats) had resisted women's suffrage, and up to the leading Social Democrats it was felt that that the final form of government must first be decided by the National Assembly. How that would have decided - without previous revolution - seems doubtful - or actually no longer doubtful. Mr. Payer had indeed spoken in the spirit of his party, which in its program by no means even the parliamentary monarchy, but only the constitutional (separation of powers between prince and people) demanded and their successors, the Democrats, even in Weimar half vote for Schwarzweißrot. Probably it would have, if things were purely legal, come to a kind of Reichsverweserschaft, and how something grows out, we have seen in Hungary.

Miliukov recounts in his memoirs that in October 1917, a few days before the revolution of the Bolsheviks, the White-Guards General Kornilov Kerensky had offered to settle in Petersburg and put things in order. Although the water was already in his throat, the socialist Kerensky could not stop unleashing Kornilov's troops on the workers. Our Noske had fewer scruples there, and General Groener had 1918 in December and 1919 in January to thoroughly "put in order" in Berlin.

The pious legend that Ebert, Noske, and Groener saved Germany from Bolshevism is already refuted by the fact that there were hardly any Communists back then in Germany. In all the workers 'and soldiers' councils, the majority socialists had an overwhelming majority, and when this majority was rebelled out of the factories and barracks, it was only because that majority disappointed even the most modest petty-bourgeois expectations. What at that time decreed the people's representatives, for. The right to vote for women and youth, for example, was easily swallowed up by the National Assembly and who seriously doubts that it would also mean the expropriation of the princes, the abolition of the nobility, the destruction of the East Elbe landlords and, above all, the creation of the unitary state, if they had found those reforms, would have swallowed!

We do not accuse this revolution of not beginning to socialize in the general chaos, but it was not even a radical bourgeois revolution. However, this would have included the creation of an absolutely republican Reichswehr - if one already insisted on a Reichswehr - and a decidedly republican officialdom. It is said that the necessary people were missing. This may be true of the membership of the social-democratic parties, because after all, no social democrat could become a civil servant or acquire official knowledge before the war. But it did not matter so much to the lower civil servants, who had hitherto mostly been apolitical or had the political opinion of their superiors; They also held up relatively well in the Kapp Putsch because nobody wanted to lose their position. (How would that be today?) There were enough reliable Republicans, merchants, teachers, physicians who had thoroughly worked their way into the administrative apparatus during the war, or at least had acquired the conditions for training, to fill the middle and, above all, the upper official posts. The republic (with the exception of Erzberger) renounced these people, even if they were Walther Rathenau and Hugo Preuss (one was taken too late, the other sawed off too soon); It even placed posts that lacked expertise, but only tolerable manners, and preferred to dismissed officers as reliable republicans, thereby ensuring that a reactionary administrative apparatus could sabotage all legislation.

It must be admitted that now, after 11 years, one begins to see the mistakes made, and even more gradually to make amends, at least in some places. Whether the reaction leaves us time for that? She has her hand on the throat of the Republic, and from Austria blows a bad east wind. From St. Helena, Napoleon has profiteering, in a hundred years Europe will be Republican or Cossack. The decision for Central Europe will soon be made.