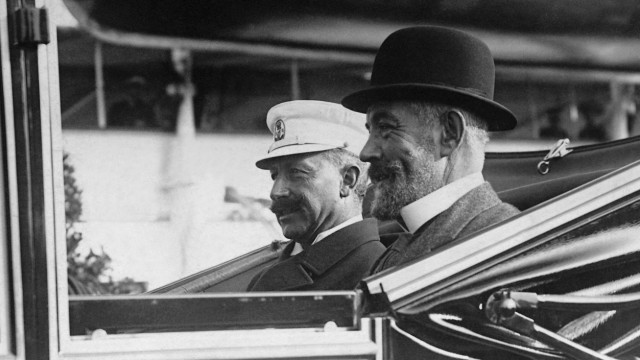 As a few months ago, the last volumes of the work "The big policy of the European cabinets 1871-1914" appeared, the fighters against the "guilt lie" the German people great salvation proclaimed. There it would be, the innocence of Germany! (They always talk about Germany, if they do Wilhelm mine.) The gentlemen have taken care, however, to denote the documents in more detail, which are to prove the innocence of William. You probably knew why. There is no such thing. On the other hand, there are numerous documents in the "great politics" that weigh heavily on Wilhelm and his henchmen.

On the 20. December 1912 has prince Lichnowsky from London Bethmann (Nos. 12561): "We are respected here, it is estimated that we may be overestimated, and out of this feeling, which one would sometimes be inclined to call fear, the endeavor is to constrict us, but not the desire to to fight us. For this the common interests are too great, the economic connections too narrow and too significant, the material losses of even a victorious war too sensitive. In addition, one has become too comfortable here, the people are peace-loving and love not to be disturbed in their daily habits. A war with us would not be popular at all, but it would still be waged to protect France if we threatened it. Because one believes here that it would not be able to defend itself without British help of the German supremacy. "

On the 7. March 1914 has again reported to Lichnowsky (No. 14700): "The undiminished preservation of France is as much a political necessity to us as the preservation of Austria-Hungary, and they would therefore, as I would like to emphasize, be in a war between us and France in all circumstances keep her protective hand above the latter. "

So much for the German-English relations. Now to the German-French. On the 30. November 1912 has the German Ambassador in Paris, Baron v. Nicewritten to Bethmann (No 12471): "The satisfaction with which the news of the apparent relaxation of the international situation is being taken shows that the overwhelming majority of public opinion desires nothing more than that France be precluded by war may be preserved. "And the report concludes with the words:" Without the justification of a German attack threatening France, I would certainly not accept that Poincaré or Millerand or Delcasse in the face of the dismal mood of the majority of the Chamber and the people, it would never dare to put the country before an accomplished fact. "

On the 4. December 1912 Lichnowsky has the following comments Grays reported to Berlin (no. 12481): "But a European war arose by the fact that Austria went against Serbia and Russia, forced by public opinion, and not again to experience a humiliation like 1909, in Galicia had invaded, what would cause us (Germany) to help, so the participation of France is inevitable and the consequences are incalculable. "

What was the relationship between Germany and Russia? On the 6. February 1913 has the German Ambassador in Petersburg, Count of Pourtales, reported to Berlin (No. 12805): "I stick to that Emperor [Tsar Nicholas II], Sassonow and Kokovtsov "Pour tant et tant de raisons" (for so many reasons). , , do not want the war and do anything to avoid it. But I would definitely like to accept. , . that, in the event of an action by Austria against Serbia, the comparatively small but powerful and very active group of Panslavistic Hetzer would sweep away all public opinion and oust the current heads of government, and that at least the war would be very likely. "

On the 17. June 1914 has the German ambassador in Bucharest v. Waldhausen Sassonov's statement to Rumanian Prime Minister Bratianu reported to Berlin (No. 15833): Sassonov has repeatedly stated "that Russia pursues the most peaceful policy. He also had peaceful intentions towards Austria, but under no pretense could he permit an Austrian attack on Serbia. "

So: by inciting the Austrians to war with Serbia, Wilhelm and his Bethmanns set Europe on fire. You are the culprit, the sole culprit. This is what "The Great Politics of the European Cabinets" proves.