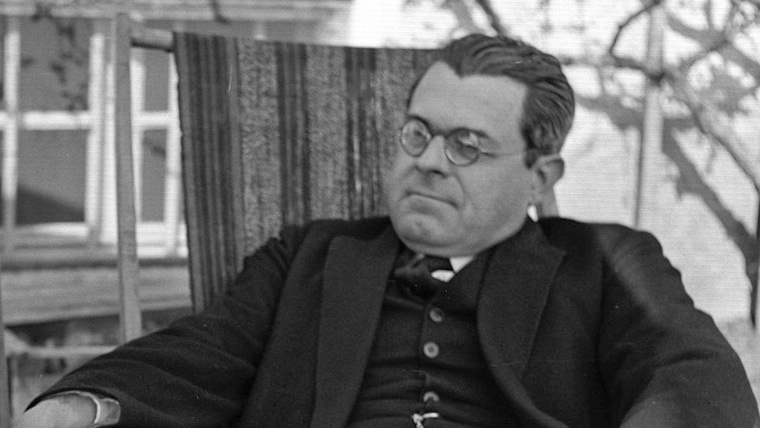 A publisher and journalist like Erich Schairer is hardly conceivable today. His credo was: fight against church, capitalism, for public service and justice. At the beginning of 1937, the Nazis imposed a prohibition on his profession and 1946 became co-editor of the "Stuttgarter Zeitung". On the 21. By October 2012, he would have been 125 years old.

His career begins with an ominous "white gap": the end of 1919 is Dr. med. Erich Schairer editor-in-chief of the Heilbronn Neckar newspaper, succeeding his friend Theodor Heuss. For some time contradictions have been smoldering between Schairer and his publisher. In an article on the first anniversary of the November Revolution, Schairer writes that Germany has become a decent democracy, but in the realization of social justice one has not got beyond a "staggering beginning". In the liberal Heilbronn, this is the ghost of socialization. Schairer gives in by polemicizing against the "stabbing legend" of the Right - this article no longer appears, the publisher oppresses him. Schairer fits. The sheet appears with a space on the one; visible from afar: a mark of censorship. For Schairer this is the final exam; the true balance of power in the young republic has been revealed, he can only relinquish it.

For three days he should have chopped wood at home, a hard winter was imminent, in every respect. Schairer decided to start her own newspaper. The hour seemed favorable, everywhere was new beginning, departure, desire for change. The democratic republic needed journalistic escort. And Erich Schairer offered her one: the Sonntags-Zeitung. Critical, rebellious, a press experiment. On the 4. January 1920 appeared for the first time, four-sided, in Berlin format, in 1000er edition and for the price of 25 Pfennig. A highly political enterprise, but also an act to restore the dignity of a censored journalist.

The Weimar Republic produced its own type of journalist - politically and literarily, analytically and ironically. Of course, the mixture of these four temperaments was individually pronounced; Carl von Ossietzky, Kurt Tucholsky or Theodor Wolff to study. Or to the now almost forgotten newspaper maker Erich Schairer, who lived from 1887 to 1956 and the three big names only infer the fact that he was not one of the primarily perceived capital city journalists, but in the province acted.

Laconic, shocking, provocative, even poetic - these were Schairer's registers. After dropping the atomic bomb in Japan, he wrote of the "missing people who are blown to atoms ..." Through journalists like him, the newspaper industry after 1945 a root in the rich, highly developed democratic press landscape of the first German Republic. "Graveler", "creative rebel", "born journalist", he is called in the few literature to his life and work (still highly recommended Will scraper knowledgeable portrait). These legends originated simultaneously with the Weimar Republic, during which Schairer became the most popular newspaper man in southern Germany.

Erich Schairer was on 21. October 1887 born in Hemmingen, Oberamt Leonberg. The pietistically educated teacher's son is a well-known way out of the: Blaubeurer Seminar over Tübingen pin in the Württemberg parish. 1905 moved Schairer to Tübingen and operated as a "Gazettier" in the federal newspaper of his association "Roigel", graduated and became 1909 parish priest in his hometown. Almost as a vicar, he would have been drawn into the nearer Lustnau, but immediately he wrote to the consistory: "I am sorry to relieve my transfer to Lustnau, then I am known." Short, dry, blunt - that should also distinguish the later newspaper stylist. He asks 1911 for his dismissal. The vicarage does not seem to him the right place to remodel the zeitgeist, and he almost wonders why it took so long for this realization.

Schairer commutes between politics and journalism for a while; both could be the appropriate professional field for the expressionist - he is also a passionate debater. He takes 1912 Reutlinger Generalanzeiger his first editorial office.

Now he has arrived: "I like to smell printing ink. A double rotary machine is something wonderful! We stay that way. "Insignificant, that he later as private secretary of the Liberal leader Friedrich Naumann a pinch of politics - in journalism he has found his passion.

When the First World War began in the same year, it became clear that Schairer was still a child of his time. He cheered hurrapatriotisch, if only in medium volume. As a writer and organizer he had to deal with the imperial orient policy, the "German-Turkish Association" he served as managing director for a few years But strange: Schairer saw himself as a socialist and democrat even at this time. And after the end of the war he remained a social reformer in the Naumannian sense, only forgoing the option of national power politics.

Schairer was transformed from an expansionist to a pacifist, from a peace-loving Democrat to a left-wing, grassroots Republican. A fundamental change, as many in this time, only that Schairer performed it particularly quickly and radically.

This radicalism was perhaps the result of his pietistic, strictly self-imposed education; It is thought that something is to be felt when Schairer speculates on the political man of his time, who is so in need of the barely established republic and the early-murdered socialist Kurt Eisner for him, "Our tragedy," says Sunday newspaper 1925, "we have men of character, but they are not politicians. And we have politicians, but with too little character. The right alloy is missing. "

Schairer's organ, the Sonntags-Zeitung, which first appeared in Heilbronn and later in the more urban, better connected Stuttgart, always had a pronounced economic policy accent. In it she was different from left-wing intelligence sheets like the world stage, action or storm, whose main hobby horses were culture and politics.

Schairer wrote for the common good, for fair wages and prices, socialization of raw materials and large-scale industry, for a works constitution law and codetermination. The little people were dear and worthy to him. Alongside Hermann Hesse, Maxim Gorki and the great caricaturist Hans Gerner, his free-lance employees also included market women, craftsmen and farmers, whom he often invited - nowhere in the twenties is the network idea in journalism as pronounced as in the Sunday newspaper. Freigeister as well as pastors read their Schairer, even if he settled his sheet now and then church exit forms.

The circulation of the weekly newspaper quadrupled from 2000 in twelve years. About two-thirds of 1933's circulation went to northern Germany - Hamburg and Leipzig, Cologne and Magdeburg were the main places of the unmistakably southern German newspaper; also in Scandinavia, even in the US, the advert-free newspaper was sold - only in Bavaria: no indication.

Schairers Wochenblatt wanted to create a critically-realistic picture of time, in addition to his ongoing economic themes with articles on the Weimar pathologies militarism, anti-Semitism, emerging Nazism. 1931 seduced Schairer to take over the editorial board of the St. Gallen Volksstimme and sell his own paper, albeit with a contractually guaranteed right of repurchase. To the horror of his family, he soon made use of it and moved from safe Switzerland back to uncertain Germany: He had disliked the work of his successors, with left kid stuff and KPD slogans, he said, you could not beat Hitler.

But this did not manage this journalistic Sisyphus, although the Sunday newspaper could hold after 1933 with an unadjusted Schlingerkurs still a while. Many employees soon had to flee, others came to concentration camps and prisons. Schairer herself often received a Gestapo visit, and time and again the paper was banned - and when it came out, it was only XXX, instead of Schairer's name. At times, he skipped - cunning in dealing with censorship - entirely on articles and put only talking classic quotations in the sheet. When the Nazis cheekily offered him a chief editorial post, he wrote back: "Thank you for fruits and tropical fruits!" - which of course was a rejection.

Finally, the Sunday newspaper 1936 was banned; Schairer came as a wine traveler and Reichsbahngehilfe on the rounds - 1945 was not the smallest brown splash on his jacket.

Beginning 1946, Erich Schairer, 59, drove to Tübingen to take his place as the lead member of the "Tagblatt" to compete. It would be better for him, the Stuttgart military government finally decided on the licensing of the Sunday newspaper - but nothing is happening. Schairer would have been able to participate in a newspaper creation in [...] Lindau as well, but finally he promised the Tübingen to avoid "sitting down between two chairs" or "marrying three brides" like his daughter, the journalist Agathe Kunze, once told.

Schairer knew Tübingen, here he had studied, the connection "Roigel" belongs and, swabian-sturschädelig, in the Philosophers faculty - until today unique - enforced a journalistic history doctoral thesis: "Schubart as a political journalist", his body and magenta theme.

His first editorial is on 16. January 1946 in the sheet; mentally, and thus linguistically clear, he went to work, which was the same everywhere: reconstruction, moral, political, material. "Woe to us if the millennium of Mr. Hitler had lasted more than twelve years," he writes, who risked everything 1932 had lost a lot in the fight for freedom and republic. Or, in the tradition of the forty-eight-year-old he loves: "Even this people will learn to govern themselves." In order to create the conditions for this, however, the elites should never again come to power, which is so disgraceful in the rise of Hitler failed. It must be fair in the reconstruction, "even if old property terms are a little unstable".

This idea corresponded to the public service idea Schairer had been advocating since the First World War - with which he wanted to overcome capitalism, albeit without giving up his liberal conception of society. Schairer was not an hour communist, but rather an idealistic democratic socialist. This is also reflected in the commentary in Tübingen, in which he calls for a "non-partisan political press" for the future and turns against the apolitical Generalanzeiger press with their "advertisement plantations".

Eleven years after the end of the Second World War, he died, 68 year old, now probably well-appointed co-editor of the Stuttgarter Zeitung. He had thought of everything, even "Advance for obituary". [...] When he was terminally ill and could no longer avoid visiting one of the hated clinics, he is said to have laughed: "Anyone who goes to a hospital is killed in it." He was right again this time.