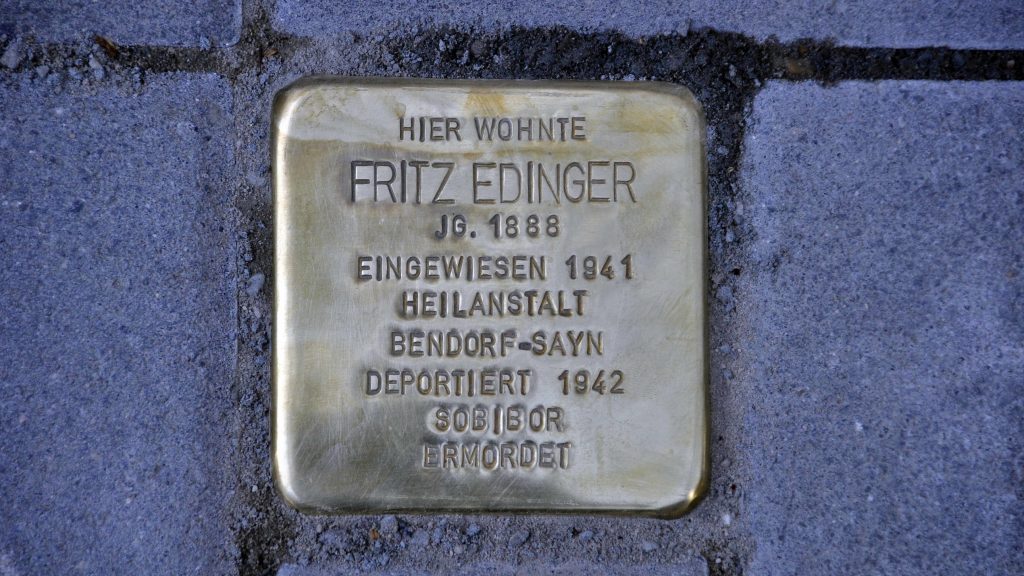 Stumbling block for Fritz Edinger in front of the house Gärtnerweg 51, Frankfurt-Westend

Marc Adolf Friedrich Edinger, who was always called “Fritz” from childhood, was the eldest son of the brain researcher and neurologist Ludwig Edinger and his wife Anna Edinger, His sister Dora (1894-1982) married the pharmacologist Werner Lipschitz-Lindley (1892-1948), his sister Tilly (1897-1967) justified the Paläoneurologie.

Edinger studied medicine and became 1913 in Heidelberg PhD. His thesis was titled: "The services of the central nervous system in the frog, shown with regard to the animal's way of life".

1914 married Fritz Edinger the historian Dora Meyerwho, in turn, received her doctorate in history at the University of Heidelberg in 1912 with a thesis on “Public Life in Berlin in the Year Before the March Revolution”. The couple had three sons, but the firstborn son died a few days after the birth.

Im First World War Fritz Edinger worked as Military doctorHe was wounded in a gas attack and retained a permanent neuropathy. The couple Edinger worked in the environment of Free Jewish Teaching House in Frankfurt and in the Jewish lodge B'nai B'rith.

1924 also earned Edinger the PhD in the subject sociology with a thesis on "Contributions to the theory of economic policy." He edited the book series "Lebendige Wissenschaft", was a correspondent for the "Heilbronner Sonntagszeitung" and was involved in the Frankfurter SPD. As a doctor, he hardly practiced. In Frankfurt he lived in Gärtnerweg 55, which was only formally his own house from 1939. By the end of 1939 Edinger had to pay RM 16.460,77 as a “Jewish property tax”.

Dora Edinger was able to escape to 1936 with the youngest son in the US, the elder son managed to escape to Palestine.

On the 15. December 1941 Fritz Edinger was arrested on the street. Because he was obviously considered mentally ill, he came from the Preungesheim Prison in the Frankfurt University and mental hospital and later into the Israelite Healthcare and nursing home for nervous and mental patients Bendorf-Sayn near Koblenz. This served since 1940 as a central collection point for Jewish mental patients. Together with numerous patients, Fritz Edinger was deported to Sobibor in June 1942. There he was probably already on the day of arrival, the 19. June 1942, murdered.