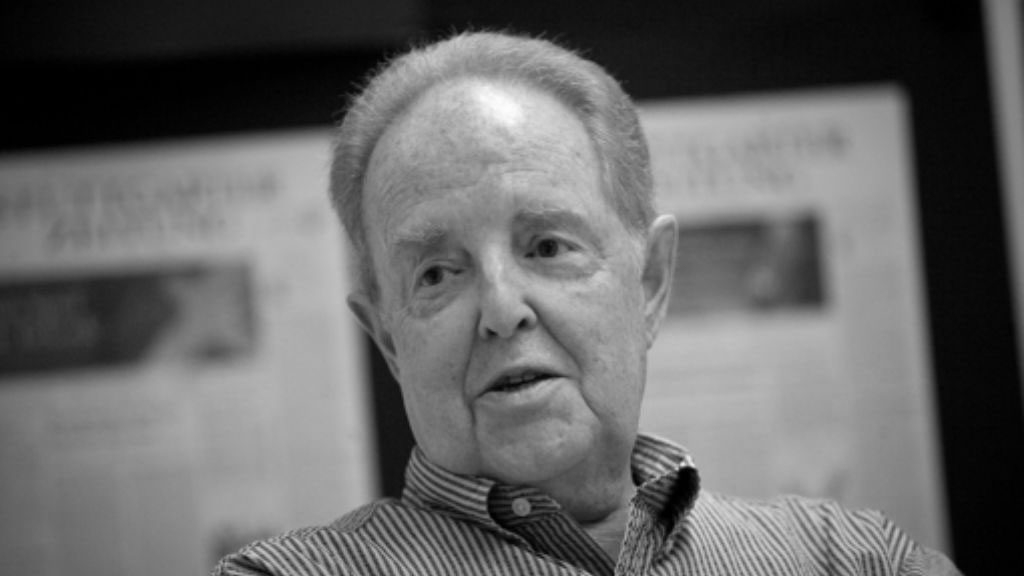 Stuttgart - Where am I? "Main station, exit in the direction of travel, left, the speaker has chained in my hearing aid. I jumped out of the super train, into Stuttgart-Underground. 'There you are now in the sunshine, beautiful, as I've ever seen you ...' Oh Karl Gerok! "So begins an award-winning story that appeared five years ago in the Stuttgarter Zeitung. Martin Hohnecker, the author, undertakes a personal expedition into the year 2022 through futuristic tunnel labyrinths and urban concrete mountains. As a 83-year-old man, so the fiction, he goes on the stick through the Einundzwanziger paradise of the new central station and tries to find their way self-explaining, somehow: "O Karl Gerok! Nix Sonnenglanz, huge illuminated fried eggs illuminate rolling trains, running travelers, smelling fry pubs. Oha, these are the frog's eye-catchers, the 'business cards' of the city, from below - and I am in the middle of the zero-energy station, where life runs like on rails. Only I want to get out, like Orpheus from the underworld. "

Martin Hohnecker will not experience this anymore. Last Sunday, the longtime local chef and deputy editor-in-chief of the Stuttgarter Zeitung is just a few weeks after his 73. Birthday died of cancer. The memorial service took place on Wednesday at his last wish in the closest family circle at his place of residence in Freiberg-Heutingsheim in the district of Ludwigsburg.

Martin Hohnecker has shaped the StZ, where he remained loyal to 2004 even after his retirement, in more than four decades like no other editor. He was a language virtuoso, an excellent writer, a favorite among readers, an innovative, creative mind. He gave the long-disputed color photograph a place in the reputable newspaper and gave the local culture its own podium. And he was instrumental in many important strategic decisions of the publishing house as well as the expansion of reporting in the counties around Stuttgart - all with the aim of strengthening the role of StZ as the leading national newspaper and at the same time in the state capital and the entire region firmly anchored.

Actually, Martin Hohnecker had when he joined 1. April 1969 want to stay in the Baden-Württemberg editorial office only two years, at least that was his intention. "The fact that the principled Schwabe forgot his intent and almost spent his entire journalistic life at the Stuttgarter Zeitung, was a stroke of luck for the newspaper," wrote former editor Peter Christian as "high" ausschied ausschied - "and probably for him."

Hohnecker, son of an architect, came to 9. April 1939 in the Pietistic Korntal. That has shaped his attitude for life. A deep sense of duty marked him. At the same time he had the wonderful gift of self-irony and a tangible, sometimes frivolous, but never hurting humor. After graduating from high school he gave according to his own confession a "motley interlude as a laborer, babysitter, photographer and musician". Then he was educated in the bookstore on Bubenbad in the east of Stuttgart to the publishing house. But soon he was drawn to journalism. "After two years of professional practice, fed up," he noted in a CV to the address of Josef Eberle, who steered the StZ as publisher for almost three decades and has embodied: "During lunch break question by telephone with the newspapers Nordwürttembergs: Who seeks volunteer? The "Ludwigsburger Kreiszeitung" was initially awarded the contract, because it did not decorate itself long ago, but 1969 already switched to the StZ. "I hope to be able to meet the expectations," wrote Hohnecker to Eberle, "I'll make an effort anyway."

Eberle and his longtime co-editor Erich Schairer Hohnecker felt in the spirit of close ties. He was always concerned with the tradition and values ​​of a newspaper that, in the words of its founding fathers, stood for the free word, the independent standpoint, for tolerance, justice and practical helpfulness, as he once put it. From the beginning Hohnecker got his full education, his wisdom as a precondition for a sure judgment. He was an educated citizen of old school. He was knowledgeable not only in terms of the spirit, but also in details: be it in terms of city and country history, be it in politics, weather, literature, biblical matters, music or wine, and good food , His love belonged to jazz.

"What distinguishes the wine connoisseur from the simple wine drinker?", He once asked and also immediately answered: "That he wants to combine smelling, tasting, and swallowing with the knowledge: Where does the vine juice come from, how is it stored, which are the finest Years? "Hohnecker always wanted to know exactly. This sincerity, his own interest in the subject, he was able to convey to readers like few others in the editorial board. Because the broad knowledge coupled with him in an extraordinary way with an outstanding expressiveness and the gift of never falling into an academic tone. Beyond the usual journalistic prose owing to the hustle and bustle of the daily newspaper transmission, there is a wealth of literary quality in the StZ archive from Hohnecker's pen.

Especially in his glosses, which always appeared on Saturdays, he has found his own style, his own language, which makes the pieces unmistakable. Legendary, for example, is a column on the then leadership Querelen at the Museum of Natural History, in which he let the dinosaurs issued at the "Turmoil in Stuttgart Jurassic Park": "I think, 'I stand in the woods," snarls the senile forest elephant, his left tusk still missing in Cannstatt travertine. "Goes to the bone, the constant change of personnel." - "Yes," moans the flatulence-plagued musk-ox, "somehow it stinks here tremendously."

Martin Hohnecker was blessed with many talents. And in retrospect, it seems only logical that he climbed remarkably fast in the editorial hierarchy. Especially since he always dressed correctly with jacket and tie, also in appearance "bella figura" made. He advanced early to the head of the district office - and emphasized from the outset his official understanding, namely, unconditionally for "his" editorial work, without that he would have ever peddled. In a harsh letter to the publishing house, he complained to 1970 that the foreign editors had no answering machine and only two telephone lines each. At the same time, he referred 80 Mark back to the newspaper from a special payment "to show you how important I am to better working conditions for my colleagues and how little I am inclined to demand." Typically Hohnecker.

1974 moved him to the StZ branch in Ludwigsburg for five years, escaping an excessive amount of organizational work. "Spokenly, he mixed up the communal scene, to the delight of the readers and often to the horror of the establishment," as former editor-in-chief Christian found. Here and there, writing must have had something of a personal hygiene character to him as well. Because later - as a chef on duty and from the mid-eighties on as local chef - Hohnecker had to complete the daily route from his home in Freiberg am Neckar to the editorial office in Möhringen. Not infrequently, the trip got to the congestion torture, which promptly reflected in the sheet. The written standstill chronicles are uncounted, because the author - however annoyed always - the goal always reached, so also on 25. September 2002: "12.25 clock. Arrived on the parking deck north of the press house. 35 kilometers in four hours. Juhu, track record. 13 clock. In the canteen, a traveling companion and colleague G. told that he had left the highway via a police exit and thus won an hour. Final nervous breakdown. "

Martin Hohnecker has earned lasting service in many areas, as pathetic as that sounds. Where to start, where to stop? As an author he was and remains a role model for many journalists, not only at the StZ. Finally, he taught himself in seminars at the University of Hohenheim and the Publishers Association in the training of young talent. If need be, he would deal with the powerful in the city and the region - in a subtle way, for example, when he made fun of the police chief's daily routine, punctuated by several official meetings and many breaks, a local reporter in the circles seriously had put on paper. Already the headline was of sarcastic laconics: "from the stress of a president". That sat.

Hohnecker, who radiated worldly manners, preferred the foil to the saber - and thus gained respect. Even in the editorial office, he could if necessary give the strict teacher with a patriarchal habit. Handicrafts were an abomination to him. And when the remarks of individual colleagues in the conferences threatened to get too long, he began to flick nervously with the pen.

This was in no way in conflict with the encouraging and caring nature he gave to many colleagues and his strong social streak. The StZ Christmas campaign "Help for the Neighbor" was a matter of the heart to which he devoted himself with great voluntary commitment. Thus, he was at the forefront of helping those in need in the city and region with a total of 18 millions of euros during his term of office over the years. Hohnecker was also able to warm himself up for people with very different views from his own, so he cultivated an intensive, by no means uncritical relationship with the Remstal rebel Helmut Palmer. "One should not bite the hand that strokes one," he let him know this one time. And he advised young fathers in the editorial office not to exaggerate the work effort too much, but also to take time for the family - a request that he seldom followed, and in his own opinion too seldom.

In his vision of Stuttgart 21 the author Hohnecker escapes from the city in the end. "Relief at the resurrection in Feuerbach station," he writes in his story: "Hurray, at least here everything is still as it used to be." Since Sunday, nothing is as before: Martin Hohnecker, the wife and son and family with the beloved grandchildren Paul and Emma leaves, went to another world. He will be missing. His traces remain.