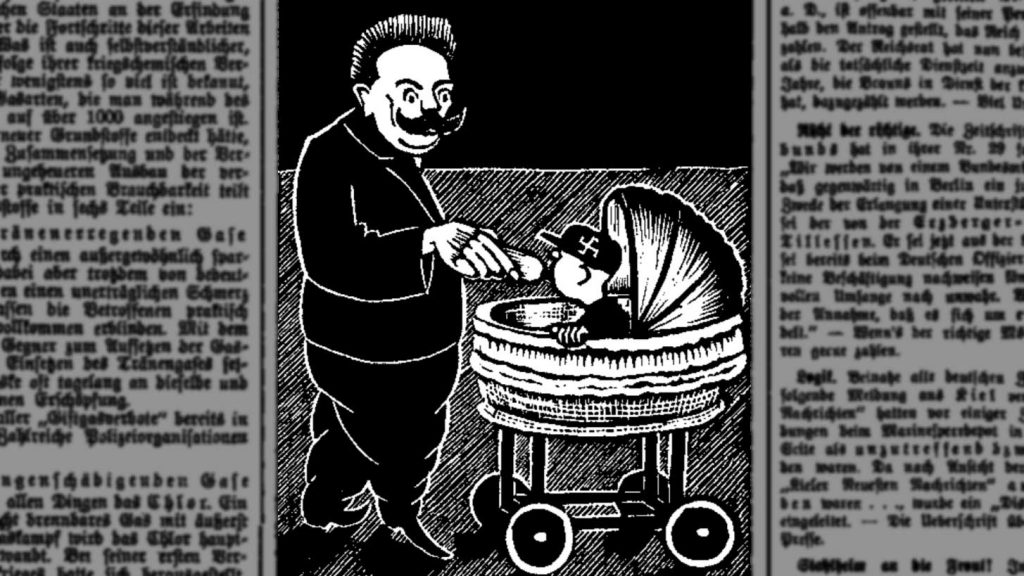 The German national deputy Hugenberg is one of the most powerful men not only in the German National People's Partybut in Germany at all. What is his power based on?

In the year 1913 shared August Scherl the Chancellor Bethmann-Hollweg with, he'll get 8 million marks of common shares Scherl publishing to sell; Rudolf Mosse offer him 11 1 / 2 million marks, but he, Scherl, is ready to give "friends of the government" the core shares of 10 millions.

Bethmann negotiated with some rich people; vain. The danger that Rudolf Mosse or the Brothers Ullstein could take over the Scherl publishing house, became more and more threatening. Finally, to ward off this "Jewish danger," from which high and highest places in Berlin trembled, took over (do not laugh!) Baron Alfred von Oppenheim and the Cologne financier Louis Hagen the 8 million Mark common shares.

But now Alfred Hugenberg, Chairman of the Board of Directors of Krupp, one. He founded the "German Publishing Association"; In the following years he bought the Scherl publishing house. Hugenberg simply turned to the Prussian government with the request that the Deutscher Verlagsverein "be given an advance from any funds not known to us". On a secret decision of the Prussian Minister of the Interior, the publishing house association received 1914 in August and 1916 2 / 1 in the year 2 million marks. (The fact that these 5 millions have not been repaid today is not exactly a compliment for the republican government of Prussia.)

So Hugenberg acquired the Scherl publishing house, which now a lot of strict German national newspapers (above all the "Berliner Lokalanzeiger"), Magazines, magazines and books.

Hugenberg realized, however, that in Germany the provincial press is just as important as the Berlin press. The Paris and London newspapers have much larger editions than the Berlin ones, because they are also read in the provinces. In Germany, on the other hand, the smallest provincial town has its local papers, and most people, humble as they are, are content with the spiritual food of this newspaper.

These "channels to the brains of the people" made Hugenberg serve his interests. He founded 1922 the "Provincial Press Department (Wipro)", which has one Mater correspondence publishes. After the inflation he bought up a second Matern correspondence. These correspondence send editorials, news, chats, novels, sports reports, etc., in cardboard strips, to the provincial printers, who use a simple metal casting machine to produce the printing plates. Pick up some provincial paper - besides the local news, everything (including the ranting about Berlin centralism) has been fabricated in Berlin. And most provincial papers get their material from Hugenberg's workshops.

However, such correspondence can only forward the news to the newspapers it receives from somewhere; it is therefore dependent on the news bureaus. After the war, there was only one single news agency in Germany of importance: Wolff's telegraph office (WTB). This was on its domestic news dependent on the government (it is the Officious News Bureau), on its news from abroad by the English and French news organizations (Reuter and Havas). So when a revolution broke out in Buenos Aires, the news about the Reuter office and the WTB went to the correspondent offices. When the metal pressers went on strike in Berlin, the WTB reported this fact to the Reuterbüro with the necessary comment and this led the message to the New York newspapers; How the message arrived there, one can imagine.

Here Hugenberg intervened by acquiring and expanding the Telegraph Union (TU) He broke the news monopoly of the government-dependent WTB domestically and set about setting up his own intelligence service abroad: he signed contracts with foreign news agencies and set up his own branches. So if a strike breaks out in Berlin, the TU will give the message with the appropriate comment of the United Press and this, it must deliver, after the concluded contracts, unchanged to the American newspapers. When there is a street curfew in Prague, then the Prague branch of the TU reports to Berlin, where the message is prepared and then, partly in telegrams, partly already in Matern, sent to about 1600 German newspapers. Not only to German national newspapers - no, Hugenberg also supplies newspapers of the German People's Party, and even center and Democrat papers with news and editorials. Of course, the news must be carefully selected and "evaluated", ie commented on, with due regard for the party status of the receiving newspaper. With this task, Hugenberg employs non-2000 staff, 500 to 600 permanent staff, and 90 Redakteurs.

You're right. They are right ten times since Hugenberg also tries to bring film and cinema under his control. He already has 1916 "German Photo Society" founded, then 1920 the Deuligfilm A.-G. originated. And a year ago he has the workshops and the theaters of the largest German film company, the Universum Film Company (Ufa) acquired. There is no need to say a word about the increase in power that this intrusion into the film industry entails.

Where did Hugenberg take the money with which he acquired this power? Answer: 1. From the Prussian government (see above); 2. from heavy industry; 3. from the landlords. There is one exception, however, and this is very indicative of the development and the current power of the Hugenberg Group: Hugenberg has its own power, ie reserves and commercially normal bank loans, from its own resources, without any capital contributions from industry or agriculture incorporated.

For example, during the last fourteen years, Alfred Hugenberg has built a building that will not easily collapse. Because he knows the people and has built his building on their taste for the mediocre, their lack of civilian bouts, their mental clumsiness and their lack of criticism. And these are the safest foundations.