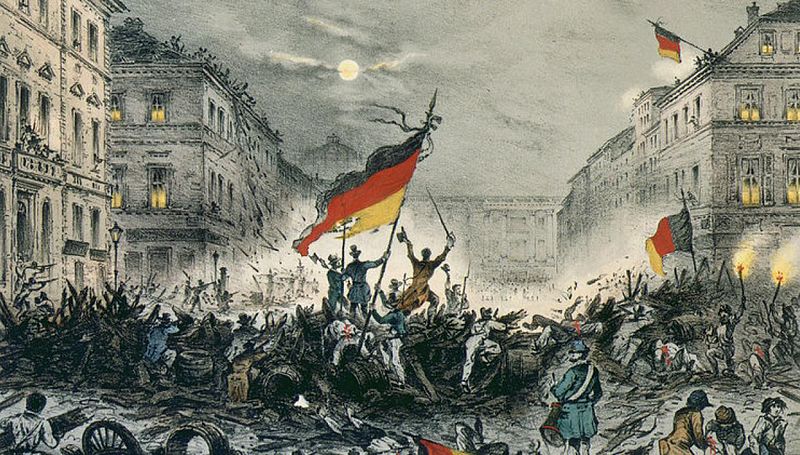 Today, 75 years ago, on 18. March 1848, was street fighting in Berlin. On the barricades stood workers from the engineering factories of Borsig, Egells and Rüdiger; next to them the students, from whom they had been taken from the factories. In the cemetery of those who fell in March in the Friedrichshain, there are six students from the University of Berlin among workers, craftsmen, commercial employees and "women of the people", among them a studiosus of Bojanowsky, a stud. med. from Holtzendorff. Students forced the king to bare his head in front of the bodies of fallen workers. And girded with a black-red-golden sash Frederick William undertook his famous capitulation ride through Berlin.

Today, after 75 years, student battalions form when it comes to knocking down workers. Students shoot workers "on the run". Students insult the black-red-gold "Jewish flag" of the German Republic. But this republic, which is still officially called the "German Reich," is ashamed of its colors, instead of being proud of its great tradition; and prefers to hide it rather than show it.

"Prussia goes on in Germany from then on," Friedrich Wilhelm had spoken at that time (and as a good Hohenzoller of course not kept). It was the idea that inspired the "Deutschlandlied" of the revolutionary Hoffmann v. Fallersleben (which today the reactionaries sing in the German "Café National", when they got drunk with French spirits). Follen, the Jenenser fraternity commander, had drafted the plan for a German republican constitution in which the existing national borders had been removed, which divided some Germany into estates and divided them into circles as in ancient times. The Frankfurt National Assembly of 1848, preceded by its president Heinrich von Gagern, had taken up the program of crushing Prussia and recognized its great political importance. A Ludwig Pfau repeatedly wrote his "ceterum censeo Borussiam esse delendam" (at least Prussia must go!).

Today Prussia is still there. There are still two governments, two parliaments in Berlin. Prussian politics are still being made, both internally and externally. When Secretary of State Preuß 1919 made his first German draft constitution appear, it had been believed that Prussia would now fall. But it was already too late. It did not turn into anything. In the Constitution of the 11. August 1919 are a series of articles that are taken literally from the constitution of the Frankfurt National Assembly of 1849 (and just as on paper as then). "All Germans are equal before the law." "All titles are canceled." "The entails should be dissolved. "In our present constitution we also do not find many sentences that were then included in the constitution by the German National Assembly, by a bourgeois parliament. "The death penalty . , , is abolished. "" The taxation should be arranged so that the preference of individual estates. , , stops. "And when we leaf through the minutes of the Paulskirche, we come across demands from the mouth of university professors and high school teachers, who today none of their grandchildren would dare to represent. Karl Biedermann, Professor of Filosofie in Leipzig: "Where state and church are separated, we see political life in the highest development. , . "Karl Vogt, Professor of Zoology in Gießen:" I am for the separation of the church from the state; but only under the condition that what is called church disappears without a trace. , . "Karl Nauwerck, Professor of Filosofie in Berlin:". , , Religion and the church must be a private matter. , "The same Nauwerck:" Every German has a right to maintenance,. , , the right not to starve. "Abg. Eisenstuck-Chemnitz: "It has been said that capital uses work, and if it no longer suits it, it throws the work aside. , , That's right. "Abg. Schütz-Mainz: ". , , Is this state, founded on capital, really the ideal of human society? "

You see, history makes little steps. At least in Germany.

From the Weimar Constitution
Article 165:. , , In order to fulfill their social and economic interests, the workers and employees receive legal representations in workers' councils as well as in district councils organized by economic areas and in a Reich labor council. The District Workers' Councils and the Reich Labor Councils meet to fulfill the entire economic tasks and to participate in the implementation of the socialization laws with the representations of the entrepreneurs and other involved groups to District Economic Councils and a Reich Economic Council.