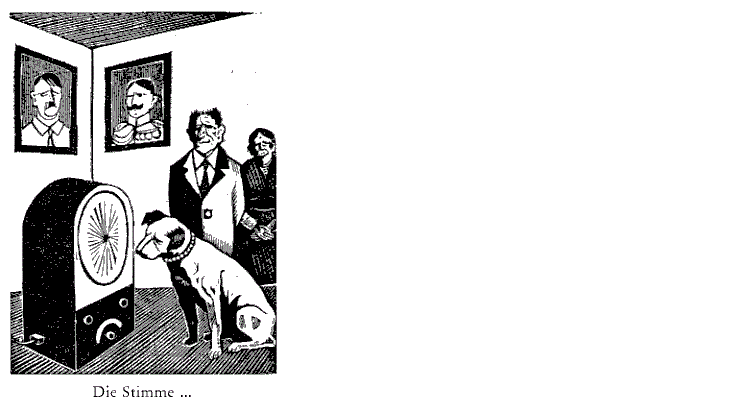 The March brought the National Socialist Party, and thus the Hitler government, a victory of unexpected proportions. In the Reich and in Prussia, the 51 percent majority was not only achieved, but surpassed, almost exclusively due to the enormous increase in votes of the National Socialists. In mathematical terms, they have not only mobilized 3,8 million non-voters since then, but also attracted almost 2 million voters from other camps; and not only from the “national” reservoir, but evidently also considerable numbers from the source areas of the center, social democracy and the communist party.

Without a doubt, this fabulous success is first and foremost Propaganda from durch broadcast attributed to such a degree and with such strength has never been operated by a party and has been able to operate. This time, Hitler's election speeches are also in the smallest village, in front of people who were virgin soil, so to speak; Events like that Search of the Liebknecht House and the Reichstag fire with their consequences and consequences could be exploited one hundred percent; and that was the complete elimination of a large part of the opposing press, especially in northern Germany.

From the left, the election campaign was operated on by arguments that were bound to fail in the face of the broad-based mood.

They asked where the program was that would help the new government to save Germany. Such a program did not exist in detail; but its absence has probably benefited rather than harmed the ruling parties. In this way, every critical debate about the concrete was undermined. The belief in the will of the government replaced a dubious insight into the correctness of their plans, and that belief proved to be the much stronger driving force. The people saw men before them, who in any case could not doubt their will to prevail, and the masses were still inclined to follow them.

Where political power is concerned, the will is decisive, not the intellect, whose role the old Oxenstjerna did not consider too high. The weakness of the German Left, which has now manifested itself with such painful clarity, lies to a good degree in the fact that too little will in it is coupled with too much intelligence.

The fact that the government restricted freedom of expression and other civil liberties before the election, this other accusation so strongly accentuated by the left-wing press, did not do much harm to them during the election campaign either. Nowadays, the simple man (and the simple woman!), Especially in the countryside, does not care so much about these freedoms: he who has nothing to nibble and bite, the democratic fundamental rights are not in the center of interest daily bread, and anyone who can persuade him in any way that he will make sure that it will be better fed to him in the future, that is his man, even if he forbids newspapers and dissolves meetings.

The victory of the swastika in Germany at the 5. March is the victory of an unprecedented skillful propaganda campaign. If, as one hears, one of the chief investigators of the National Socialist election campaign, Mr Goebbels, now has a special one Propaganda Ministry which would be a clear proof of the importance which the government itself attaches to an instrument so masterly handled by it.