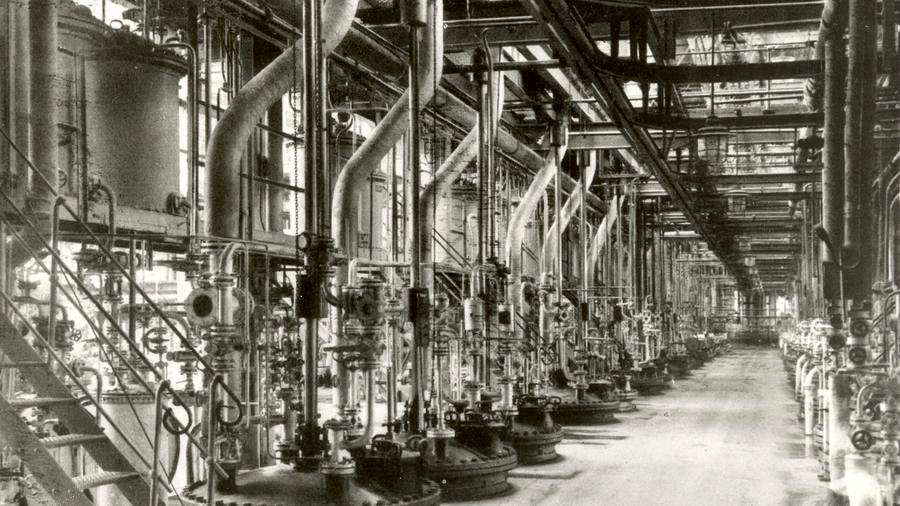 Today, three things are needed to wage war: poison gas, dynamite for the explosive projectiles, and oil for the operation of ship and aircraft engines. In Germany, these three means of warfare are produced in the factories and laboratories of Chemietrustes, I.-G. Paint industry A.-G.

In the autumn 1913 is the first factory in Oppau, in which nitrogen (the main constituent of the nitric acid needed to make the dynamite) is extracted from the air using the Haber-Bosch process. Without them, Germany 1914 would not have been at war for three months. In May 1916, the recently formed Interest Grouping of the German Chemical Industry (the predecessor of I.G. Farbenindustrie A.-G.) founded the second nitrogen plant in Leuna. When liquefaction of the coal succeeded after the war, the community of interests has bought its own coal fields, especially from the liquidation mass of the Stinneskonzerns. In December 1926, the trusts united in the syndicate were merged to form a large company named I.-G. (Interest Community) Farbenindustrie Aktiengesellschaft received.

This I.-G. Farbenindustrie A.-G., the German Chemietrust (headquartered in Frankfurt am Main), not only owns 39 large-scale operations and mines, but also controls numerous "Montanwerke", oil factories, explosives factories, arms factories and "interest groups". and ammunition factories, enterprises of the electrical industry, and has recently 50 percent of the shares of Rheinische Stahlwerke A.-G. bought up. The share capital of the Chemical Trust amounts to 100 million marks; The Trust is undoubtedly the largest capital power in Europe.

And now it is necessary to spend a moment with a little chemistry chapter.

Coal tar is used to extract benzene, fenol and other oils, which are the starting materials not only for most colorants but also for the main toxic gases.

You see: tools of peace and weapons of war close to each other. Nitrogen is used as ammonia for the fertilization of the field, as nitric acid for the production of gun cotton; Indigo or filmstrips are made from the same materials as poison gas; The production of silk stockings is very similar to Dynamit's.

In other words, the German chemical giant, the largest capital power in Europe, can turn overnight into Europe's largest armaments trust. He produces the three things needed to make war: dynamite, poison gas, and oil. (Oil - because he holds a patent for the Bergin coal liquefaction process, which is being used for the first time on a large scale at the Leuna plant, completed in April 1927.)

If a war breaks out today, the chemist is the first war supplier. Then his capital will not pay interest as before with 300, but with even more. And he would also share in the war profits of the coal and archdukes; because he is already negotiating with the Vereinigte Stahlwerke A.-G., the second largest capital power, on a closer connection, on the replacement of the previous competition by a community of interests.

The chemical trust not only seeks to "come to an understanding" with its domestic partners, but also with its competitors abroad. During the Ruhr War, the German chemical industry notified the French War Ministry and the French chemical industry of some patents and undertook not to build any factories in France for the next 15 years. For good payment, of course. The trust has also sold patents (e.g. for oil refining) to British and American companies. The chemical trust has factories in Spain, England and the USA. The establishment of a European chemical trust has been negotiated for some time.

This internationality is a guarantee that the German Chemical Trust no danger of war, that he would always produce silk stockings instead of dynamite?

To accept that would be a frivolous deception. Even before 1914, the arms and explosives industry have been connected internationally (the Nobel Group, for example, has dominated explosives production in almost all states).

The peace guarantees do not create the economy, but the politics. And if governments do not pursue a policy of peace (armaments in all states prove that they do not), and if they themselves are under the influence of the war-making armaments industry, then there is only one thing to be done: unification of all peacemakers, above all unification of the working class Fight against the imperialist policies of governments and arms industrialists.