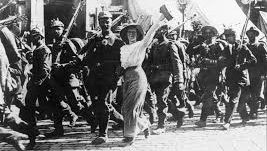 “We”, to whom these lines apply, is a very substantial part of the educated German middle class. When on the anniversary of the German revolution we asked what happened to the “revolutionary achievements”, the answer could only be: nothing. It is true that we ourselves did not reasonably hope that the German Republic would do us better financially than before; only we would have wished that the burdens of the lost war had been distributed a little more evenly on all shoulders than it actually happened. But also the most precious goods that the new era promised to give us and for the sake of which we would have waived some other advantages: Justice in state administration and freedom of personal conviction, they too are so strong in the “freest republic in the world” endangered as only ever in the times of the monarchy.

It is very convenient, but neither honest nor convenient, to seek the blame for these miserable conditions on our own. Let us think back some years!

We were good patriots. The war had ruthlessly driven most of us to the front. There was little of the "indispensable" in our ranks. Why? The state was not obliged to us. And we were chained to him by the bourgeois sense of honor, which he knew how to tickle at the right time by raising us to the glory of his officers. So we went through thick and thin for him and defended ourselves to the end against the feeling that he had shamefully betrayed us, that he had shamefully betrayed the whole of the German people, although our experiences at home and outside bore ever more vivid evidence of it. Then came the revolution. In the first moment everything seemed to collapse, what had previously been established, what had also supported our lives. We thought the thrust was directed against us. Then we began to think about it, but we were still tormented by the most ambivalent feelings. If we wanted to throw ourselves enthusiastically into the arms of the new movement, overwhelmed by the tremendous happiness of the magic word “peace”, it pushed us back at the same moment through its accompanying phenomena, unleashed criminal gangs and looted magazines. However, we soon realized that this rampant chaos was about to give birth to a whole world of new ideas, the boldness and size of which made our heartbeat slow. It swept our minds like spring storms. Now everything had to be swept away that was low and ugly in life. But we watched the ghosts fight idly. We waited for others to bring us freedom. We did not understand the pleading cries of the fighters who asked for our support. We did not make ourselves available when it was a matter of clearing the musty offices of the privy councilors. Instead we made cheap jokes about the shoemakers and tailors as ministers and took a secret pleasure in the fact that this republic, which had come without asking us, was now in trouble without us.

We realized too late that their needs were also our needs. The bold, heaven-stricken roof, which had to build on the fragile old walls, threatens to collapse in its last parts and bury us among themselves. Can we think of a new building? Only if we start from the bottom, when we start with ourselves.