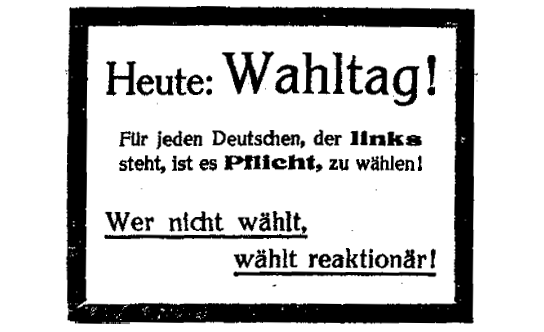 The ominous forces that have plunged Germany into ruin for ten years continue to rumble on. It seems that the bulk of this people have not learned the slightest thing from the bloody and tragic lessons of their past. Especially not the class that once boasted that it represented "education and property". Not the faintest realization has dawned on her that nothing else is to blame for Germany's misfortune than the unrestricted ruling cult of violence, the belief in the fanaticism of the power politics, Even today, and especially today, the cause of the world catastrophe and the collapse of Germany everywhere else, in the encirclement policy of the "enemy alliance", in the inadequacy of the Army template of 1912but not where it can be found: in the stupid and brutal idea that by force of arms Germany could seize supremacy in Europe. And yet it was this delusion that provoked the World War. How easy it would have been to preserve European peace if Germany had come to terms with England, instead of attacking all the great neighboring states. But one believed to be able to defy the world with the best organized army in the world.

And one possessed of this consciously militaristic power-madness and the most visible embodiment of it during the last decade Ludendorff, A soldier who might have mastered his trade as thoroughly as any of his contemporaries, but who could do so Curse of his country was because he considered all folk and peoples life only from the perspective of the soldier. Without any understanding of the social, cultural and moral forces of contemporary life, he thought only in divisions, batteries and submarines, breakthroughs, evasion maneuvers, and extermination strategies. But since the components and exponents of world affairs could not be reduced to the simple militaristic formula, Ludendorff's calculation could finally be impossible. He now brought all the world against Germany, unleashed irresistible opposing forces and playful Germany's future. To the Zusammenbruch of the year 1918 is he is the true culprit.

Yes, Ludendorff's military defeat would have been even more dreadful if the revolution had not brought strategic relief to the shabbily beaten Commander-in-Chief and his relentlessly retreating, half-dissolved army. Only the proclamation of the German People's State prevented the Entente Powers from exploiting their victory militarily to the utmost and completely destroying the retreating German troops; French and American forces were deployed in strength by 50 divisions to make the deadly flank strike against the German army debris east of Metz as many French-American troops should follow. It was an unnamed fortune for Germany, it saved the lives of hundreds of thousands of Germans that this attack was stopped as a result of the truce. Had Ludendorff had to endure this last blow, it would not only have been for his generals glory, but also the idiotic Stab-in-the-Back Myth he would surely have gotten stuck in his throat!

Only because Ludendorff, the German military caste, and the whole German reaction, thanks to an undeserved destiny, were saved from the last, most disgraceful consequences of their brutal insanity policy, only because the revolution took from them the consequences of military defeat, submission to the Treaty of Versailles, etc. The nationalistic conceit will soon be inflated again in all its insolence.

Only a few weeks had passed since the military collapse, since the disgraceful abdication and flight of Ludendorff, and already in Germany the old spirit stirred again. The young army of the Republic became the leader Wilhelmine Generals, and especially the socialist leader, in whom the spirit of honest confessionalism and peoples' reconciliation was most alive, Kurt Eisner, fell at the hands of a nationalist murderer who had been incited by the chauvinist agitation of the old war criminals only to his misdeed.

How then, in the course of time, the old state of mind of the German people again set, so is all too well-known. We experienced the various stages of "fulfillment policy," which was nothing but systematic non-fulfillment. Erzberger He wanted to raise so much taxes to cover not only his own state expenditure, but also the reparations obligations. But the very deliberately induced and exalted Inflationwhich enabled a fairytale-like collection of wealth and the most adventurous tax evasion of the industrialists and sliders, led with iron necessity to the bankruptcy of the German Reich and the bankruptcy of the reparations policy. The policy of non-fulfillment that persisted throughout the years incited the French politicians of violence to return Ruhr occupation at. The occupation of the Ruhr inflamed the German nationalism even more. The "forbidden" secret societies achieved a tremendous spread. The passive resistance often enough turned into active. Schlageter became the national hero of the nationalists and - communists!

And behind the active resistance, which was to grow into the popular uprising and the war of liberation against France Hitler and Ludendorffwho had long since become the idol of all nationalists, the future liberator of Germany. Already during his interrogation before the committee of inquiry in the year 1919 he had been given stormy honors, and how great in the meantime his popularity had become proved in Munich beside the hacking together of all officer-witnesses and the cheering of the folkish, those born of devotion and revenge-spirit acquittal this main culprit.

No doubt: Ludendorff still considers himself the colonel of the new world war and strong parts of the German people share his faith. And the French are too intelligent a nation not to recognize these signs of the times. They recognize them even earlier than some Germans themselves. So said General Buat Already 1920 foresaw that Ludendorff would be the organizer of the counterrevolution and the revenge war. From his facial features, the angular double chin, the overly strong cheeks, he read the relentless energy of the will, the hardness, not to say the rudeness of the man, who shrank from no means that seemed to lead him to the goal that his excessive arrogance set have. "No, of course," wrote Buat, "he does not put himself in the position, he will never give in. Who knows if there is no room for one in the turmoil that the future holds German dictator will give, and maybe even for a European? ... Ludendorff is the man who is capable of playing the part ... We will hear him speak again. "And Ludendorff hastened to confirm the lifelongness of his drawing to his French portraitist.

One can therefore imagine how the appearance of Hitler and Ludendorff, and how, above all, the acquittal these organizers of the revenge war must act on France. Because even Hitler was, by granting the probationary period, actually acquitted. How he "will prove himself", have proved his Drohreden in court. And the effect of this process must be deepened by the outcome of the process Zeigner, For the unprecedented verdict against Zeigner was only the supplement to the Hitler-Ludendorff trial. The Hitler and Ludendorff were punished, because of the treason against the republic and the preparation for the war of revenge The former German Social Democratic Prime Minister Zeigner was condemned, under the most brutal disregard of all moments of relief and punishment, to several years' imprisonment and the loss of civil rights, because his whole activity was in the hands of democratic subjugation Republic and the fight against military secret organizations. The incredible acquittal in Munich and the scandalous verdict in Leipzig can only be explained by the same nationalist delusion.

That Zeigner had become the victim of moral sensitivity, which was especially developed in Germany, is already the bloodiest satire. What degree of political corruption did we have to get used to in Germany! Erzberger Surely the underbrush of his party towered over a considerable amount, but that he confounded politics and private business in the most worrying manner, can not deny even those who consider his murder the most vile villainy. And yet this Erzberger would have long been back in office and dignity if he had not been struck down the killer lead. Or is sir Hermes For example, he was forced to resign from his ministerial post to prove to him the most unequivocal wine-buying stories in court? And have not recently been attached to a Secretary of State and, moreover, a high court official (Welsmann, d.) Things that would not have left without grave consequences for the accused or the accuser?

Only Zeigner, the indomitable democrat, the reckless opponent of the unions and illegal weapon groups, was hounded down and politically and humanely destroyed by a judicial murder. Yes, the nationalist persecution rage is not even satisfied with that: Zeigner is now facing charges treason was made by those speeches in the people's house and in the Saxon parliament (!), in which it was asserted that there were close relations between the Reichswehr and certain right-wing secret organizations. Among the more than 1300 Landesverratsprozessen this treason trial against Zeigner was just missing in order to instill foreign distrust of the German militarism and the German mentality. The Times also declared that the French assertion that Germany had doubled its forces for military reorganization during the arms control, which had been interrupted by the occupation of the Ruhr, was credible and, therefore, was in the nature of strict control.

On the other hand, the government shows Karr Stresemann so little determination to meet the demands for such control and the terms of the commission of experts that we will return to the heaviest external and internal conflicts could be advised. Any such conflict, however, would immediately bring our already provisionally supported currency back into the slip, and thus bring our entire economic life out of bounds and ties.

Unfortunately, only a few Germans suspect that the ground is once again swaying below us. Would the knowers use the election campaign to catch the national rage in good time!