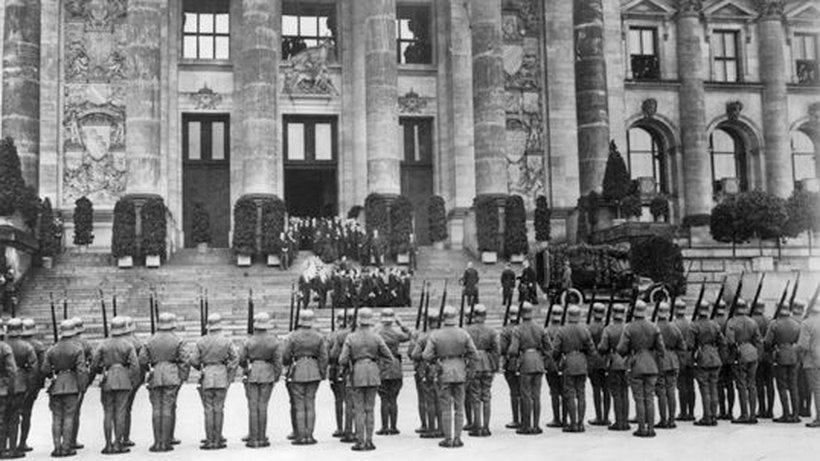 Soldiers stand guard during the funeral of Walter Rathenau: The German industrialist and politician 1922 was assassinated by rights. © Hulton Archive / Getty Images

In the summer 1919 Walther Rathenau supported me Eugen Diederichs in Jena published series "German public economy" wrote a contribution, which he "Autonomous economy" called. It has been his last and most radical economic writing; he demanded in it no more and no less than the abolition of the "entrepreneur". His party, which he was about to turn his back on, rejected this heresy indignantly and afterwards hushed the little book tactfully; it has not been included in the Collected Works published by S. Fischer. I once tried to wrest it through a cheap special edition of oblivion, and occasionally released pieces of it in the Sonntags-Zeitung.

We have to reckon with the fact of the most extreme reality that peace can no longer be concluded between employers and employees, and that our productivity is destroyed. The implication is that entrepreneurship must stop.

The ultimate goal of any future economic order must be solidarity. Never will the dual-class state: entrepreneurship - labor lead to the last solidarity, even if, by abolishing heredity and through free ascension and descent from one layer to another, a tolerable, indeed organic, balance would be achieved. But that's not it anymore. We have to skip this intermediate state, because it is too late. Instead, we will be forced to prepare a fundamentally new order, the abolition of the entrepreneur, unless we want to experience the complete stagnation of our productive apparatus. If the worker is to work with new courage and spirit in a time even harder than the present, he must know that the company belongs to him.

If entrepreneurship is abolished, then-not immediately, but as soon as the new state is fully understood-a complete change of forces takes place. Nobody can strike against themselves; No one can reproach or mop up the work itself, sabotage the means of work or damage the yield, without deliberately blaming themselves for a disorder for which no one else can be burdened with responsibility and the consequences of which one has to bear unbureaucratically. There is no complaint about superiors, because the labor leader is the own organ of the working community, there is no discussion about the labor income, because after deduction of expenses, provisions and burdens, the entire income is available, by his labor power and electoral vote it is for everyone free to contribute to the increase of the surplus. There are no complaints about domestic competition, because the whole trade is united.

Is there no complaint at all?

There will be complaints. Especially at the beginning. For in the first time the mouth-mongers and agitators will gain great influence. They will downsize the plants, not so much, but not much less than they are being run down by the labor crisis today. Then one will remove the adventurers, some of the old leaders will return and find themselves in the changed circumstances, and finally an economic-democratic race will emerge from leaders who are equal, perhaps superior, to today, and who works with considerably higher efficiencies, because Meanwhile, the economy has become organic.

Are there no more strikes?

There will also be strikes in the first period, namely political ones. But soon the realization will break through that in a democratic state the consumer has no incentive to be deprived of privation, harassment and bodily suffering, because a minority can not impose its will on the government. Political minority protests can not be constantly fought on the backs of bystanders; awakening democratic knowledge will grasp this and the legislation will follow.

What happens, then, when, through constant mismanagement, a branch of industry is so run down by its new masters that it can no longer bring in any returns, can no longer employ staff, and temporarily or permanently break down?

That's not what it should be, because in the beginning the state will have a certain amount of supervision over the economic management of the industries and the previous owners a certain insight. If it does happen, no one will be surprised if it is made use of by an institution that comes from America. If an entrepreneur no longer knows what to do there, then the state uses a receiver, which is an intermediary between bankruptcy trustee and guardian, and remains in its place until the business resumes or is liquidated.

More effective safeguards require the essentials for the nation, the key enterprises. No matter what the economic system looks like:

a nation that subjects itself to the life and death of an oligarchy of five hundred thousand miners or railroaders is just as unworthy as that which endures a feudal, militaristic or monarchist despotism. If a single state is so important to the state, if it holds the life-thread of the nation in its own hands, then it must be the best placed among its peers; each of its legitimate wishes must immediately find a trustworthy authority which examines, resolves and improves: self-help with the risk of death for all he is not allowed. Contracts and laws will not be enough to enforce this principle, because we no longer have the power to execute them, much less do we have reserves to replace the work of the revelers.

Since military education of the youth is forbidden to us, we must create a new means of national strengthening anyway, unless our youth are to dilute in the country, to throw up in the cities, and to slacken and loosen our nation. This means can exist only in a general service of physical labor, which means at the same time education and reconciliation between head and hand work. This service has given us the necessary reserves for the endangered key enterprises of the empire.

The autonomous enterprise is destined to form in social configuration the core of the future company structure.

In order to convert any beneficial ownership into an autonomous form, there is no need for a transaction, but a simple statutory provision: the shareholders or other owners join the series of creditors, they receive a cheap pension and a repayment quota that entitles them to pay They also receive a number of seats on the Supervisory Board - a right which the previous bondholders did not have - and another right to co-determination in the General Meeting, which can be extended if the promised pension is not fully paid or seriously jeopardized.

In the full rights of the previous owners, the workers and employees under a general, but not burdensome supervision of the state. They do not receive shares or rights in rem, inequality of voting rights does not take place. After deduction of costs, burdens and provisions, the surpluses are distributed equally to all shareholders - ie exclusively to employees and employees.

The transfer of property rights to employees and workers does not change the structure or business of the company. Against reckless distribution of profits secure provisions on large reserve position and maximum allowable distributions. What is earned beyond these two limits flows into a compensation fund which, once the guilds have been created, is transferred to them.

In the quest for guilds is the opposite of syndicalist principles. Here is also the elimination of the difficulty that could arise when economically weaker enterprises pay their employees bad and are harmed by the flow of power to better-placed and managed plants. The guild compensates for the proceeds, controls the executive boards and restarts jobless businesses.

Savings and increases in production occur once the guilds have been established, and to a great extent, not before. Individual incomes of highly paid farm managers will decrease in the first time; once one has convinced oneself of the rarity of talented forces (as in Russia), the demand for the few will again increase the demands that recur in the form of long-term contracts and pension claims. Asset equalization is not a matter for the economy, but the wealth policy and control technology.

At the same time, however, the whole economy is recovering. For the stubbornness and particularism of the entrepreneur, who wants to remain private in order to be master in his own house, has been eliminated; nothing can prevent the union and union of the works. After a short while, a self-governing working class will no longer grasp the idea of ​​domestic competition, it will automatically shift from work to work, from group to group, saving energy, materials, labor and transportation, choosing the right location, eliminating it inappropriate facilities, introduction of elaborate typing urge and work.

With the emergence of the guilds but the further transformation of the economic administration takes place. The production policy passes from the hands of the splintered plant pipes into the hands of the central guild lines, while the works management remains the local tasks. This results in a process of personal selection, because the unsolicited elements, which have gained influence on the individual works, will only penetrate the guild leadership through closer elections, as they prove their suitability in practical work. Retroactively, however, the guild lines will encourage the formation of the factory pipes. This process gives confidence to the departed professionals. They too have become accustomed to a new way of thinking, they understand the meaning of evolution and believe in its success. The economic-democratic leaders have overcome their hatred of distrust, the conflicts of interest have been eradicated, the value of the old leaders is recognized, and new responsibilities assigned to them.

The severance pay, the provision for capital raising go from the individual work to the guild, and both lines gain credit and security.

All material advantages, however, are surpassed by the moral ones. An economy has emerged that is no longer based on enmity, which is no longer based on arbitrarily imposed leadership and involuntary service. The agent and performer, may he be better or worse than before, work and perform for himself, for his work, for his creation, which he receives, which he administers and manages, and whom he can love again, just as his ancestors loved their works and workshops because they were their own. Despite mechanization and division of labor, the old state of free trade has been regained, in solidarity and organic structure.

Publications by and about Walther Rathenau can be found here:
https://de.wikisource.org/wiki/Walther_Rathenau