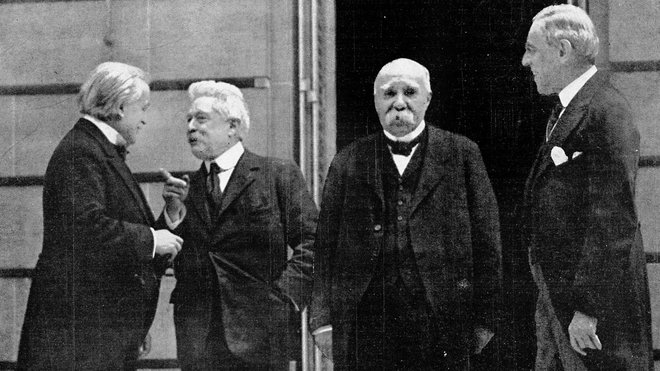 In these weeks the fight against the War Guilt Lie are available as assessories. Slave Treaty of Versailles led with increased forces. There are speeches in all the places that tell the public that we only have to pay because the Treaty of Versailles states that we are guilty of war, and the unsuspecting listeners can no longer grudge themselves with indignation at the outrageous greed for power and the injustice of ours enemies.

Now nobody will say that the Versailles Treaty be a bulwark of justice or a means to pacify Europe, and who 1918 on the fourteen points Wilson or who, despite all the disappointments, still wants to see the spirit of these points in action today, has every reason to complain about the Treaty of Versailles. But strangely, the attacks against the injustices of the treaty are coming from the other side, namely, those that are above the "idealist". Wilson mocking and recognizing in peoples life nothing else than violent regulations. It is precisely the militarists and the politicians of violence who are responsible for the Fight against Versailles This is because the principles that they themselves acknowledge have turned against their own country and not against a foreign one. In their fight against injustice, it is not about justice, but about power; Law is only a means, not a goal. And that is why we, who want to help the law of peoples' lives to power, can not easily join in this fight against Versailles, even if we regard the treaty as a bad work of art.

The unscrupulous self-righteousness of those who now appeal to law and morality and yet are fundamentally opponents of morality in politics can not be better characterized by examining the question: what would the peace treaty have looked like if Germany had won?

One still remembers the Victory peace programs of our Pan-Germanswho wanted to annex half of Europe and all of Africa. We do not want to go into that now. Even more serious are the programs of the industry and the Supreme Army Command. In September 1917 demanded Ludendorff in the event of a peace: annexation of the French industrial areas on both sides of the Meuse, military occupation of Belgium until it politically adjoins Germany, pressure on Holland to join, expansion of African colonial possessions, etc. Still further has passed a memorandum of industry associations from May 1915; It requires the annexation of the fortresses of Verdun and Belfort, the ore basins of Briey and Longwy, the coal-mining areas of northern France to Calais - in short: the Somme as a border.

Fantasies are that? May be; but as a proof of the mighty power of German industry and of the Supreme Command, we have not only such programs, but two concluded peace treaties: Brest-Litovsk with Russia, and Bucharest with Rumania.

In the peace of Brest-Litovsk, the Baltic States, Finland, Russian Poland, Lithuania, Ukraine and Bessarabia were separated from Russia, an area twice the size of Germany. William II was already appointed Duke of Courland, Livonia and Estonia. Russia had to promise to surrender the gold of the Russian state bank to Germany and to leave for eternity a quarter of all oil production in Germany.

In the Treaty of Bucharest, Romania was scaled down, disarmed and economically "enslaved" (that's what German moralists say?). "Until a date to be agreed later", the country should remain occupied; the troop command had the right to supervise all factories and factories. For 90 years, Romania had to give a German company the sole right to exploit the oil wells. On 90 years, not on 58.

These are a few provisions of the Brest-Litovsk and Bucharest Treaties, which have been signed by the friends of our present innocent lambs. They suggest that the Treaty of Potsdam, which the imperial government would have concluded in the event of its victory, would at least have been equal to the Treaty of Versailles. Anyone who knows this should rather, instead of raging against the injustices of others (with the secret goal of repaying them later), take it upon themselves and be ashamed.

Article 231 of the Versailles Treaty