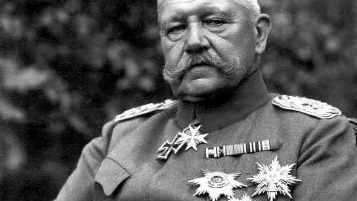 The "German General Newspaper" has pointed these days to the almost suicidal blindness with which the Republic ignores the unavoidable needs of the German people for fanatics and religious clashes. It is, it exclaims, a mischief, in a people, who enjoys the joy of soldiering in blood, to leave the army without parade uniform, and if the abolition of the orders and, for example, diplomats as replacement vases, cigarette cases with diamonds and others It is simply not known that such a thing is no substitute, and that there can never be the moral and political conquests that France, for example, makes with its Legion of Honor.

There is something about it. The harder it is for a state, the more it should take care of these unpredictable things. The German people would probably have got over the restrictions of their armed forces much more easily if they had at least been dressed up with magnificent parade uniforms [...]

Thus, in the last few years, a suppressed demand arose from a suppressed desire, into which now flows the tasteless, but to the needs of the masses knowing Mr. Hitler with his brisk SA-Heerbann. One no longer asks for programs and arguments, but asks for the apparatus. It is significant that today it is impossible to make any more policy without large, impressive marches with brass music. A deep longing, ignored by the Republic, is self-sufficient. The hearts could not find their way to the People's State, now their hands are at the seam, and it turns out to be the lightest of the groups: the group column.

What did you do to the many thousands when they were given the prospect of medals! Their magic is undeniable. Their possessions lent color and sufficiency even to the most needy existence. There were high points of life, where one brightly buttoned the order and was lifted out of the dirt; Later on, everyday life might be lousy again, the need for validity knew that from time to time it could find satisfaction.

In the difficult years of its development, the republic ought to have been able to use these human weaknesses quietly, indeed to have. One does not change the character of a people by the ordinances of today and tomorrow, and just such grotesquely unreal things as the religious magic and others have the toughest life force.

The forcibly dry-laid America the alcohol breaks out of all pores; The German people, robbed of their dumbest stupidity, create their own military parades and privates away from the state.

One should not tease a horse by the tail, especially if it is an old military horse.